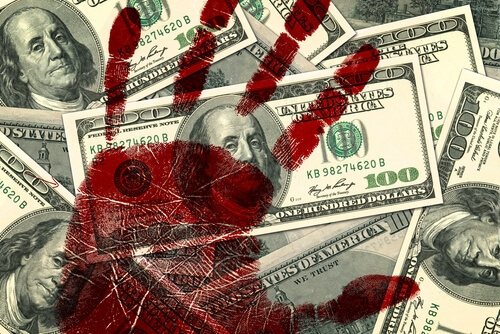 As I mentioned last week, I am down with COVID and tired, so spending more time reading rather than working. I read Bill Browder’s Freezing Order this weekend, and I highly recommend it. However, at the end of the book, Browder says that oligarchs, autocrats, and leaders like Mohammed bin Salman are enabled by the professional service providers that help them. As I reflected on this and Browder’s allegations in his book against John Moscow et al., I had to think, why do these lawyers, bankers, accountants, etc., work for these characters? They know the abuses that their clients commit but are willing to overlook them because their clients pay enormous sums. We saw what Paul Manafort earned helping Russia in Ukraine and Jared Kushner’s recent investment from MBS, so money is the driver. However, money is a lousy core value.

Now don’t get me wrong, I would like to earn a lot of money, but I am not willing to sacrifice my core values. If money, or some proxy like revenue or profit, is your core value, you can have no other core values. Money as the core value overrides any additional core values you may claim and justifies any behavior because the behavior is driving money.

Issues with Money as a Value

So if money is the core value, then the firm attracts those who believe in money as a core value; however, that can cause other issues. For example:

Now, the scandals above made many a lot of money. If money is your driver, then great. But your legacy is what you did for others, and that is how you are remembered once you’re dead. I would not want people to say, “He was responsible for the death and damage of many.” If that is how you are remembered, many will revile you in time, and your family may start to distance themselves from you. I ran into a high school friend several years ago and mentioned I had met her father after his release from prison. She was so embarrassed she walked away and never spoke to me again. So sad.

As I reflect on all the people I have met in my career, I would say that lawyers are the most unhappy and wish to be doing something else. Now that is not all lawyers, just more lawyers than others. I think that is because many law firms have no culture and will act for any paying client. If your client is against your values, you have sacrificed them for money, which leads to unhappiness because, as we have all heard, “Money doesn’t buy happiness.”

Many of the people involved in the above are on the redemption trail, e.g., Andy Fastow from Enron. But, when you look at him speaking and think of how many people’s lives he knowingly damaged, I have to ask, does going on the speaking circuit redeem him? To me, No.

As discussed earlier, Boeing sacrificed decades of industry safety leadership for profit. The Tory party, today, is sacrificing all its value for power. Once you go down that road, your reputation takes a very long time to return and often more than a lifetime. So it is critical to define your core values. I recommend that you determine your core values and define the expected corporate behaviors that your values prescribe. Then stick to them above all else. As Jim Collins said, “You would sacrifice profit rather than your core values.” Also, when hiring, look at where a candidate has come from, and that firm reflects your core values. It is easier to teach a skill than new values.

As you reflect on decisions, always think of your “elder” self looking back at the end of life and ask, is that how I want to be remembered?