Want the Best Results, Get out of your Comfort Zone 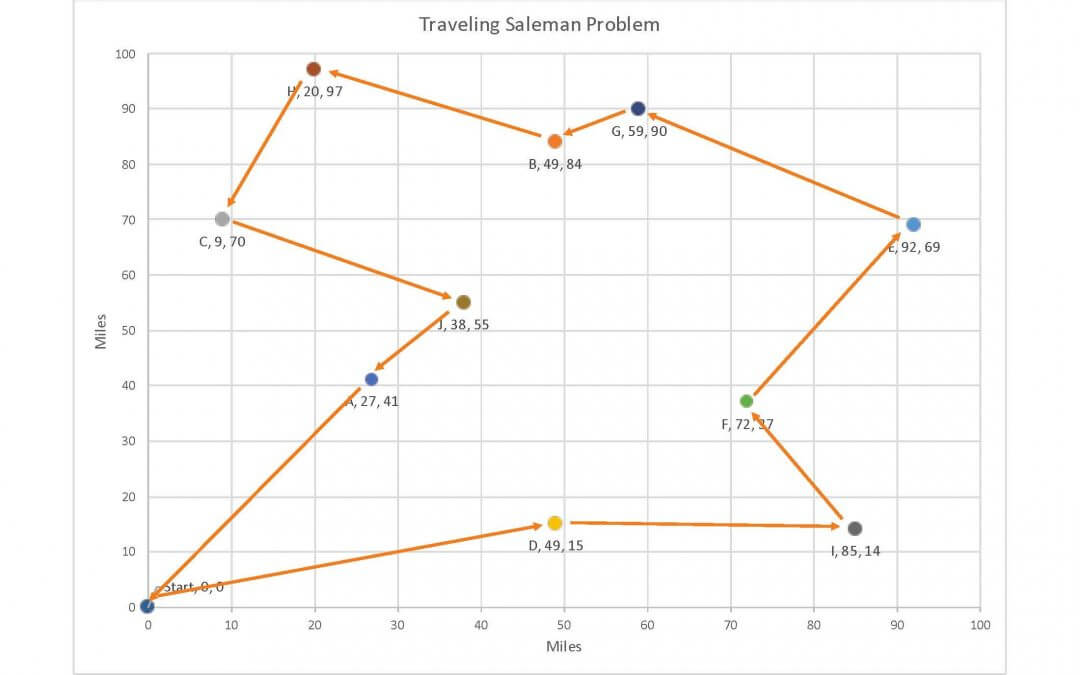 Algorithm designers know of Local Optimum in developing algorithms, especially concerning NP-Hard Problems. A Local Optimum is “a solution that is optimal (either maximal or minimal) within a neighboring set of candidate solutions.” A Global Optimum is the optimal solution among all possible solutions, not just those in a particular neighborhood of values. 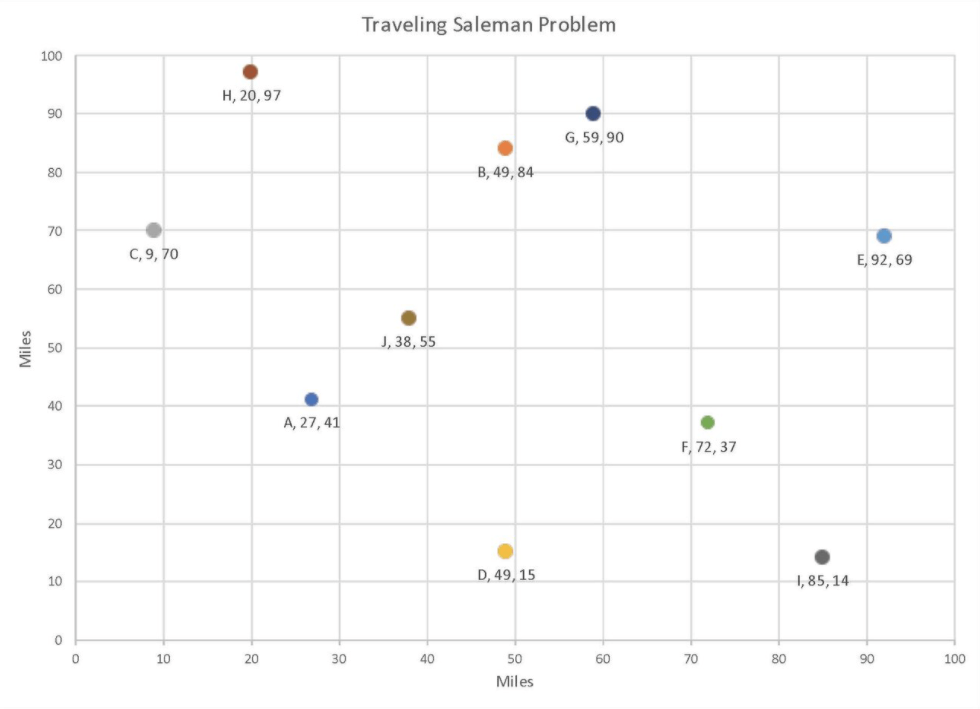 One way of solving the problem is to:

Below is the result of this solution. While it may not be obvious, the answer is not the optimal one, but rather a Local Optimum. 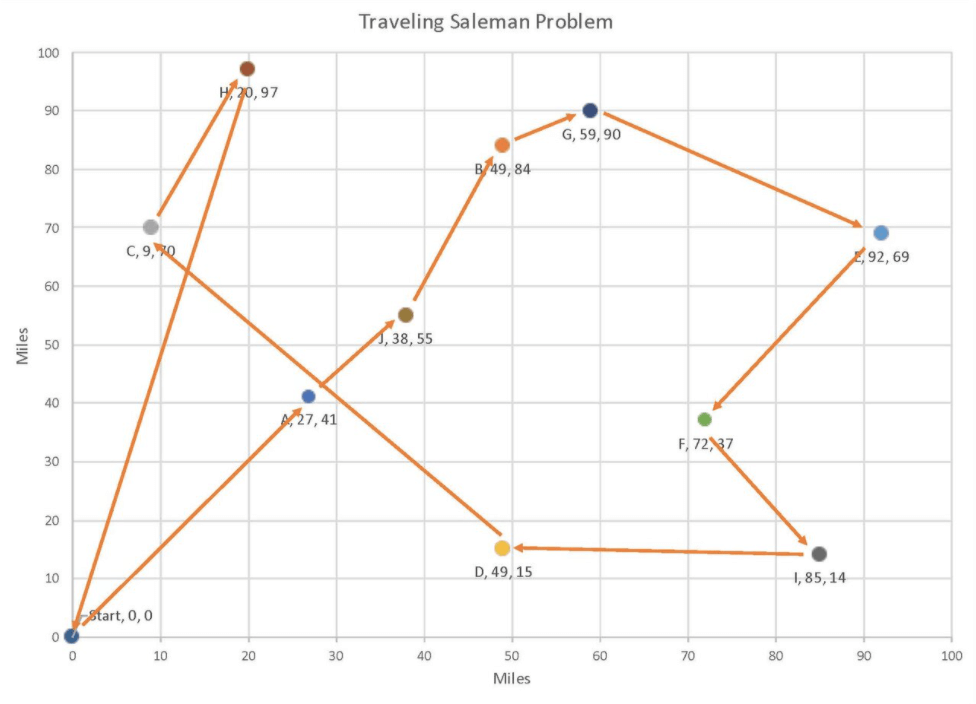 There are ways to improve on the solution using several different methods, i.e., branch-and-bounding algorithms. Implementing a branch-and-bound algorithm into the above, we get the following answer, which is a Global Optimum. 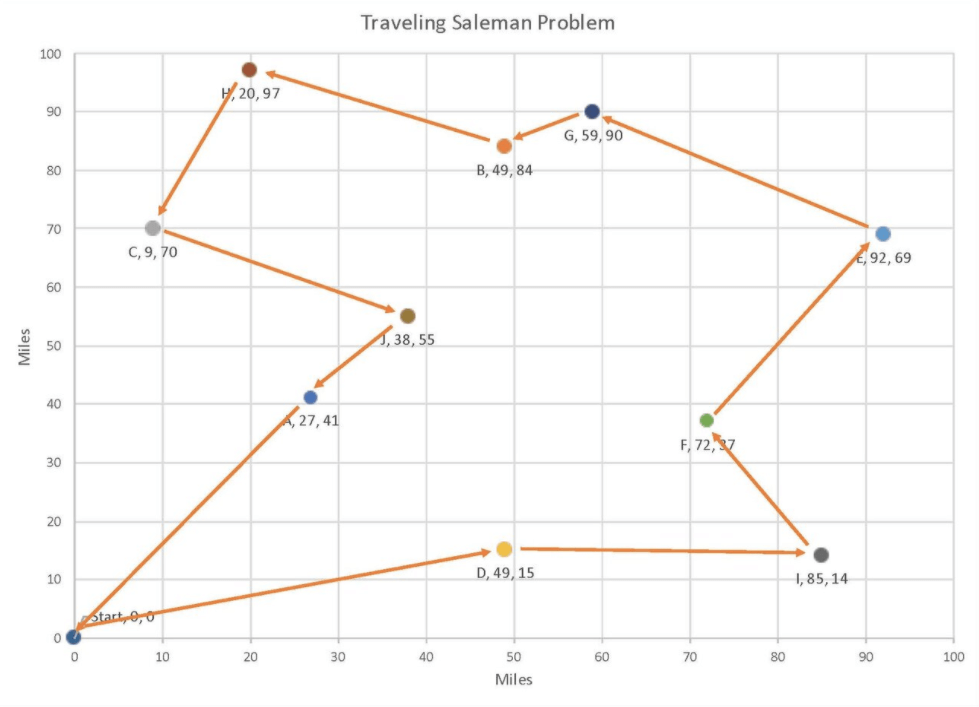 So How to Find Global Optimum Solutions

While the above works for algorithms, what about business decisions? Do employees make first-best choices? And do their choices converge to the optimum if the underlying problem repeats itself over time? Research shows results to No and No. So, what do we do? The best way is to get out of your Comfort Zone or Change Your Environment. What is meant by “Change Your Environment” and “Get Out of Your Comfort Zone?”

Change Your Environment & Get Out of Your Comfort Zone

In Changing Your Environment, you have to either remove the method that you have always used for the solution or put limitations on how you can approach the solution so you can find new and creative solutions.

Below are five examples of where either Changing Your Environment or Getting Out of Your Comfort Zone led to optimal solutions that previously were unfound.

On February 5th and 6th, 2014, the London Underground (“Tube”) was subject to a strike causing significant disruptions to the network, and the closure of some, but not all stations. As a result, some commuters had to experiment and explore new routes during this period, while others could go to work as usual. On February 7th, services returned to normal. A research project looked to see if those commuters that the strike impacted switched back to their original commuting paths? Or did some of them stick to alternative ways that they may have found during the disruption? By revealed preference, the latter possibility would suggest that they prefer the newly discovered alternative to their old habit, which would indicate that these commuters failed to find their best option before the strike.

The results showed that the strike on the Tube forced many commuters to experiment with new routes and brought lasting changes in their behavior. Changes in behavior were stronger for commuters living in areas where the underground map is more distorted, which points to the importance of informational imperfections. Information resulting from the strike improved network-efficiency as many commuters stuck with their new routes. Search costs alone are unlikely to explain suboptimal behavior.

Thus, if we force people to change their methodology by preventing them from using what they have used in the past, we may find they develop new methods that are better at generating an optimal solution.

While in art school, Phil Hansen developed an unruly tremor in his hand that kept him from creating the pointillist drawings he loved. Devastated at the loss of his art form, Hansen floating without a sense of purpose. Then a neurologist made a simple suggestion: embrace this limitation and transcend it. As a result, Hansen developed many new ways of expressing his creativity and creating art. Once he embraced the restriction, he found that there were more opportunities available. The video below is from Hansen’s Ted talk on “Embracing the Shake.

Brian Eno has helped introduce unique conceptual approaches and recording techniques to contemporary music and is considered one of popular music’s most influential and innovative figures. He has collaborated with artists such as David Bowie, U2, Coldplay, to name just a few, as well as producing albums for many artists including Talking Heads and Devo.

In 1975, Brian and Peter Schmidt published Oblique Strategies, a deck of 2.8” in × 3.5” printed cards in a black box. Each card offers a challenging constraint intended to help artists (particularly musicians) break creative blocks by encouraging lateral thinking. Each card contains a gnomic suggestion, aphorism, or remark, to break a deadlock or dilemma situation. A few are specific to music composition; others are more general. For example:

There are several editions of the cards, and while some versions are expensive and rare, some of the less expensive ones are available on Amazon.

Many musicians working with Eno have used Oblique Strategies in creating their records, namely, R.E.M. and Coldplay. However, Oblique Strategies were most famously used by Eno during the recording of David Bowie’s Low, “Heroes,” Lodger, and Outside. According to Carlos Alomar, who worked with Eno and Bowie on all these albums, is a fan of using the cards, and later said “at the Center for Performing Arts at the Stevens Institute of Technology, where I teach, on the wall are Brian Eno’s Oblique Strategies cards. And when my students get a mental block, I immediately direct them to that wall.”

While Oblique Strategies are primarily for artists, I am sure many of the cards would be great to help the creative juices within your teams who are searching for innovative solutions.

The impact of diversity on group functioning is complex. A research paper looked at the effects of a newcomer joining the group, where the group was seeking to identify a murderer given a set of information about the case. In each case, the individuals (members of sororities and fraternities at Northwestern) had twenty minutes to examine evidence and make an individual decision regarding the most likely suspect. Then they were put into teams of three of a shared social identity and given twenty minutes to come to a group decision regarding the most likely suspect; after five minutes, a fourth person, the newcomer, joined the discussion.

In looking at the impact, the researchers conducted research looking at six situations:

Social Similarity of the newcomer to the old-timers: “in-group” vs. “out-group.”

On reaching a decision, each of the group members individually completed a post-discussion questionnaire, assessing their opinions of other group members, about the group discussion process, levels of social identification with their sorority/fraternity, and their final belief regarding who committed the murder. Diverse groups, those with “out-group” newcomers, had less confidence in their performance and perceived their interactions as less effective; however, they performed better than Homogeneous groups with “in-group” newcomers. The performance gains were not due to newcomers bringing new ideas to the group discussion. Instead, the results demonstrate that the mere presence of socially distinct newcomers and the social concerns their presence stimulates among old-timers motivates behavior that can convert affective pains into cognitive gains.

So, want better results, change the team. Add people who are not part of the usual group, maybe someone from another office, to increase diversity. The effort may generate results that surprise you.

Those of you who, like myself, enjoy jazz, have undoubtedly heard Keith Jarrett’s Köln Concert, his legendary performance, which produced the highest-selling jazz piano album and solo jazz album of all time – over 3.5 million sold. So how did this excellent performance come about?

Vera Brandes, a 17-year-old young German student, part-time promoter, and avid jazz fan, was responsible for organizing the concert. For Keith Jarrett, who had played with Miles Davis and Art Blakey, this was to be the biggest solo concert of Keith Jarrett’s career, as Brandes had sold out the Cologne Opera house.

Jarrett was a renowned perfectionist, was meticulous about his pianos, and possessed perfect pitch. At Jarrett’s request, Vera had arranged for a Bösendorfer 290 Imperial concert grand piano for the show. However, the opera house staff provided the wrong piano – a much smaller Bösendorfer baby grand, which was in miserable condition and badly out of tune.

Learning that there was no time to get a replacement piano, Jarrett threatened to cancel the show. Jarrett was in bad shape as he had been suffering for several days from excruciating back pain, which had resulted in a run of sleepless nights. Having driven 350 miles, the five-hour drive to Cologne from a concert he’d given in Zurich further exacerbated his condition. Given that situation, it was no wonder that the pianist was ready to call it a day.

Vera Brandes, with a sold-out venue, refused to give in and over a brief dinner managed to coax Jarrett to perform. Meanwhile, the opera technicians spent several hours trying to make the piano playable and sound halfway decent – at least to an untrained ear. While the technicians managed to tune it, they couldn’t do much to improve its tone and timbre, which was defined by jangly high notes and a less than resonant bass register. Besides, the piano had several malfunctioning sustain pedals.

Even so, the pianist – wearing a back brace to give him extra spinal support – eventually went out on stage at 11.30 pm, as the concert was following an opera performance. To deal with the recalcitrant piano, Jarrett often used ostinatos and rolling left-hand rhythmic figures to give the effect of stronger bass notes, and he concentrated his playing in the middle portion of the keyboard. ECM Records producer Manfred Eicher later said: “Probably [Jarrett] played it the way he did because it was not a good piano. Because he could not fall in love with the sound of it, he found another way to get the most out of it.” All of this changed his environment and took him out of his comfort zone. The result: battling through pain and exhaustion, Keith Jarrett gave one of his most memorable concerts ever.

As mentioned above, they recorded the concert. It produced the highest-selling jazz piano album of all time. Before the show, when Jarrett was of the plan to record the show, he objected as he said it would be terrible given his condition and the piano. However, his manager persuaded him to go ahead with the recording so that he would have a benchmark of “terrible.” Thank goodness for us who enjoy the music.

So next time your team has a challenge, change the environment, and get them out of their comfort zone by providing something that they cannot rely on as heavily as they have in the past.

Finally, I would recommend you listen to Keith Jarrett’s Köln Concert, David Bowie’s “Heroes,” and Brian Eno’s Music for Airports. Also, you should listen to the BBC’s oral history, “For One Night Only: the Koln Concert.” produced by the BBC.