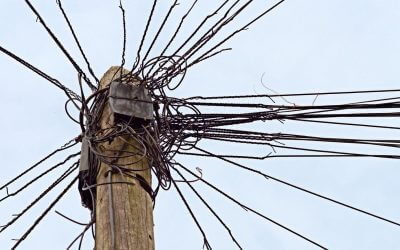 What I have noticed

When I arrived in the U.S., the first thing I noticed was all the wires that hung from poles along every road and provided squirrels with their spaghetti freeways. Other than these wires’ unsightliness, I could not understand why they weren’t buried like they were in other countries where I had lived.

Other areas of infrastructure that those of us who have traveled through Europe and Asia notice are:

Why are things this way in the U.S.? Well, as far as I can ascertain, the reasons are:

Why Does It Matter?

Now I know many of you are already up in arms, saying that the U.S. doesn’t need to follow anyone else’s example, and the U.S. cannot learn anything from anyone else.

However, I live in Atlanta, probably 5 miles from the State Capital, as the crow flies. On Wednesday, Hurricane Zeta passed through. As a result, we lost power for 36 hours, so no computers, phones, or the internet. We were not alone. According to the Georgia Power website, there were hundreds of thousands like us.

In our new world of working from home, we have two fundamental issues. For employees to be productive, they need power and internet access, as everything is now in the “cloud.” As someone recently remarked, Maslow’s hierarchy of needs has added a new bottom layer: battery storage and high-speed internet access. With COVID, there is a migration of people from cities to small towns across America. Blue Ridge to the north of Atlanta is experiencing a boom and a recent article referred to the numbers of people moving West. However, work in these small towns requires reliable power and high-speed internet, neither of which are readily available. Zeta tore through northern Georgia, and over 1,000,000 homes lost power. Twenty-four hours later, that number is still around 250,000.

In Georgia, Georgia Power and others are constructing Plant Vogtle, Units 3 and 4. Plant Vogtle is a nuclear power plant, and the original estimated cost of Units 3 and 4 was $14 billion when construction began in 2013. Currently, the estimate for these is $25 billion and rising as neither is on schedule. In 2013, it was apparent that nuclear power was far more expensive to generate at operating levels than natural gas (nearly 3x). The cost of the plant was unsustainable without enormous subsidies. If Georgia Power had built natural gas generation and spent the difference on burying power lines, the plants would be open, and we would have a more stable electrical supply.

Peter Zeihan said, “The balance of transport determines wealth and security.” According to Zeihan, the Mississippi-Ohio river system is the most important globally and a vital driver of the U.S. power and wealth. The Mississippi and Intracoastal system accounts for 90 percent of the United States’ 17,600 miles of internal waterways. This length alone is greater than the size of all the inner waterways of the rest planet combined. Furthermore, America’s rivers transform cities in the interior such as Pittsburgh, St. Paul, Sioux City, and Tulsa into ocean ports. Finally, the U.S. has more “port potential” along its coast than the rest of the world combined. According to Zeihan, “The Chesapeake Bay alone boasts longer stretches of prime port property than the entire continental coast of Asia from Vladivostok to Lahore.” The United States has more port possibilities than it has ever needed. However, it has been the world’s largest producer, importer, and exporter of agricultural and manufactured goods for most of its history.

These geographical advantages did several things.

With all the benefits of rivers, today, the U.S. is also reliant on planes, trains, and automobiles for transportation.

Air transportation services support 1.4 million U.S. jobs, and international tourism brings in hundreds of billions of dollars of tax revenue. But some studies have found that delays and avoided trips due to the poor state of the nation’s airports cost the economy over $35 billion per year.

Trains
To be clear, I like rail and enjoy using it, so I must be biased. However, in looking at the U.S. while I think high-speed rail would be excellent, that is not what I think is needed. I doubt many would take a train across the country anymore since planes do it more efficiently. However, building better rail connections between cities would be a business generating. Again, not looking at high-speed rails like Japan’s Bullet trains or France’s TGV, but rather what is considered express trains in Europe, which travel at 130 mph on upgraded conventional train lines.

The problem in the U.S. is that the automobile industry pushed to get rid of passenger rail from 1930 and succeeded in nearly doing so. While the U.S. freight train services are the most effective globally, passenger rail is the Ugly Stepchild. Amtrak uses freight lines for its many of its passenger trains; however, the freight lines are not suitable for passenger traffic, keeping the average speeds below 60 mph. Besides, Amtrack has more than a $30 billion backlog of infrastructure investments.

If I could take a train from Atlanta to Charlestown, Savannah, Jacksonville, Chattanooga, Nashville, or Charlotte that did 130 mph and provided me with high-speed internet, I would never drive again. Combine that with a car rental in the destination city, e.g., ZipCar, and I wouldn’t give it a second thought.

Finally, I expect many smaller U.S. towns to find that they are no longer serviced by airlines as the U.S. airlines retract services with the downturn in business travel. Thus, they will only be serviced by road, making them less appealing to business.

Automobiles
The U.S. benefited from The Interstate Highway Program started by President Eisenhower in 1956. Currently, about twenty-five percent of all miles driven in the U.S. is on the Interstate System. These road and river systems helped the U.S. continue its growth through the post-war period.

However, our road system is no longer the envy of the world. According to estimates, the delays caused by traffic congestion alone cost the economy over $120 billion per year. It needs investment and improvements. Congress’s failure to increase the fuel tax is an embarrassment, and failure to keep our infrastructure current will pose significant barriers to growth in the long term as transportation costs and delays increase.

Besides, COVID has decimated state budgets everywhere. Now the states have to fix many of these highways but don’t have the funds to do so, and Congress’s reluctance to help is just kicking the can down the road and increasing the ultimate bill.

Furthermore, expectations are that European distribution will grow faster than the U.S.’s over the coming years. As other countries increase their rollout of charging stations, electric vehicle adoption will grow more quickly in those countries, making it harder for the U.S. to maintain its leadership in the development of electric vehicles. That trend has started with many car manufacturers launching E.V. models in Europe and China and Tesla opening production facilities in Shanghai and Germany.

Wired
Currently, fiber broadband is now available to more than 30% of households across the U.S. Distribution increased from 12.2 million households in 2008; however, much of the increase was due to AT&T deploying fiber to 12.5 million customers under an agreement with the government for approval to buy DirecTV. That buildout is finished. As a result, it appears that Google Fiber has effectively stopped its rollout with only one new location in the last four years.

While only 30% of homes have potential fiber access, only 18.6 million households in the U.S. have a fiber subscription. While the many rural U.S. areas with low housing density explain some of the shortage, city deployment is not significant. Millions of Americans have cable as their only choice for high-speed broadband. Another study found that Comcast is the only choice for 30 million Americans. Charter is the only choice for an additional 38 million Americans regarding broadband speeds of at least 25Mbps downstream and 3Mbps upstream. Americans have no choice in areas that don’t have cable and have to rely on DSL for wired access.

As a result of COVID, many are looking to move to smaller towns where they grew up or sought a better lifestyle. However, most of these towns have little high-speed internet or options for homeowners. Furthermore, with COVID, sales and tourism tax revenues have fallen, which will result in cuts in many essential services.

U.S. fiber access is far behind numerous other countries, according to a report. Spain, Portugal, Japan, and others are above 90%, while countries such as Norway and South Korea are above 80%. 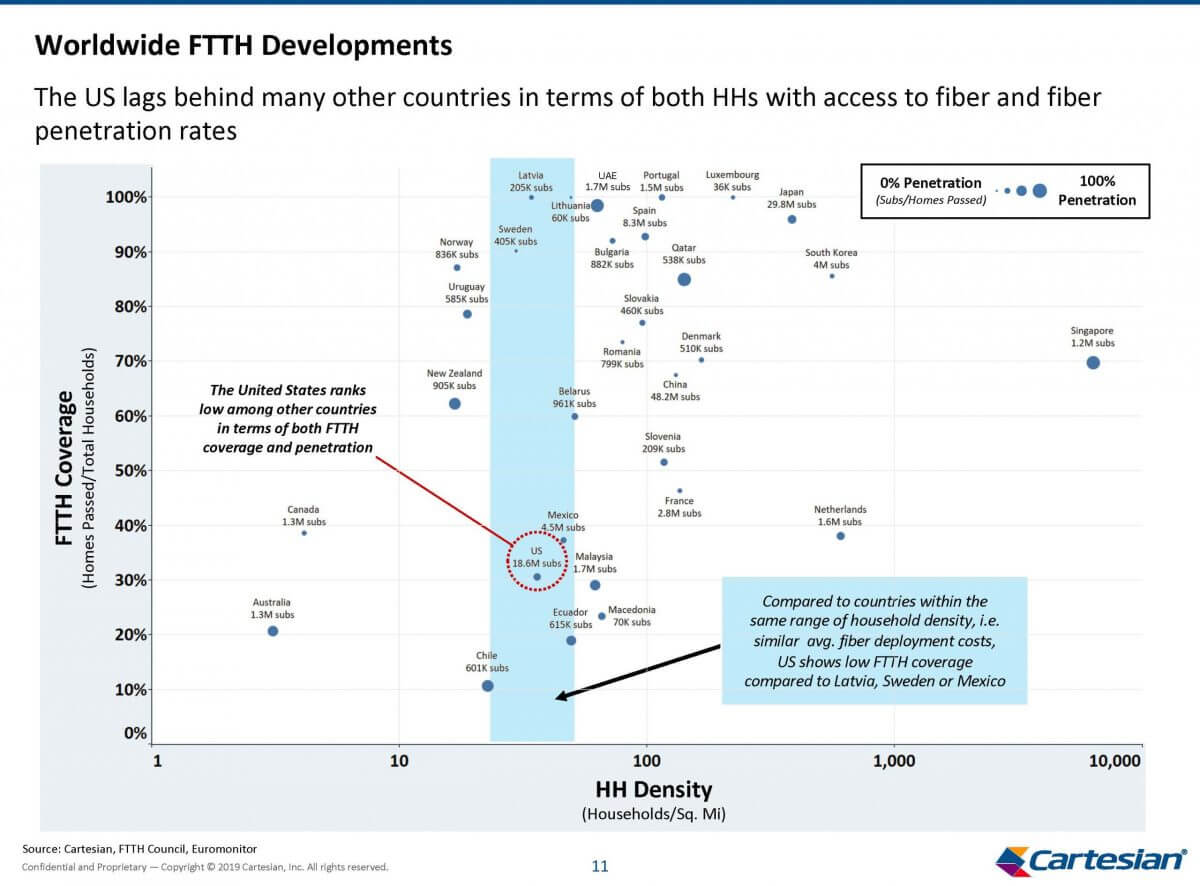 Wireless
The U.S. leads the development of 4G mobile speeds and wants to ensure it retains its leadership with the development of 5G. The current Administration’s fight with China and Huawei Technologies are part of this desire for industry dominance. Also, U.S. policies will require coordination with other competitors who make up the global 5G supply chain. Otherwise, the strategy could split the development of standards, essentially setting up incompatible technology paths for 5G, e.g., 3G.

While these policies are slowing China’s development, it will take more. Huawei remains the top filer of standard-essential 5G patents, with the telecommunications giant set to remain a leading global supplier of 5G equipment. If Huawei can establish itself as a low-cost provider as it did with 4G, carriers using its gear will be able to deliver low-cost 5G service driving broader adoption. Furthermore, experience with large rollouts of 5G will make Huawei a key provider.

Through COVID, China has continued to invest heavily in its 5G rollout for the supposed purpose of monitoring the spread of the disease. Regardless, it now has a significant lead with 480,000 5G base stations nationwide and more than 100 million 5G connections. According to Frank Meng, Chairman Qualcomm China, some 15,000 5G base stations are being installed weekly in China, and the nation is likely to have more than 600,000 5G base stations by the end of 2020.

Today, entry-level 5G plans in China cost $10, done from $18 when launched in November 2019. U.S., operators, like Verizon, are charging $10 a month — on top of its lower end plans — to customers for 5G service. This pricing difference will slow down U.S. adoption vs. Chinese.

Overall, the West has fallen behind in the competition for leadership of the 5G transition, a reality that has enormous economic implications and risks the West facing a 5G supply chain provided by Chinese companies.

In the U.S., the leading wireless providers are rolling out 5G. However, in testing, a 5G phone does nothing more than 4G. 5G download speeds are roughly the same as on 4G LTE ones, and in some places, 5G phones are slower.

The 5G is expected to:

Thus, 5G will be the new roads and rivers of the twenty-first century, and the U.S. needs to invest in 5G infrastructure to ensure it realizes its benefits and retain its leadership position.

So, What Needs to be Done

Congress needs to address infrastructure and provide funds for it. The returns from improvements in the above will far in excess anything that tax cuts have ever offered. Such projects are not “shovel ready,” and choosing how to will not be easy. But it is up to all sides to work for a solution which allows improved results and less waste. We need to realize there are no easy bumper sticker slogans solutions. But we need to educate ourselves about the situation.