Airlines, What Does the Future Hold?

COVID is taking a massive toll on the airline industry. The chart below shows the fall in U.S. passenger traffic and airline values. 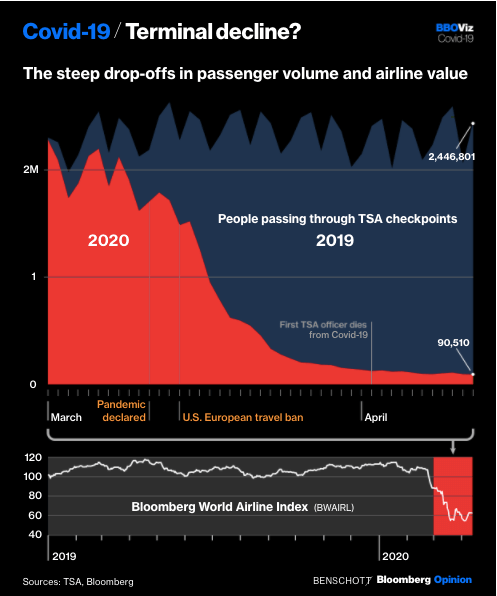 Finding the right space and conditions for 62% of the world’s planes and keeping them airworthy have suddenly become priorities for 2020. Not only do aircraft need dry climates, which makes finding space difficult, but they need constant attention. Tires need to be rotated, engines run, and aircraft powered up, flight controls checked, and sensors and engines covered to protect inner workings from sand and dust. Hydraulic fluid is put on the landing gear to protect against rust, and giant silica moisture absorption sachets are placed inside engines to keep them dry. At the same time, covering all external holes on the fuselage to block insects and nesting birds entering. All of this costs money, and storing one Boeing 737-800 costs around $3,100 a month, while a 777-300ER is $6,377 a month. Delta could pay $2.0 – $3.5 million a month for the storage of its approximately 600 aircraft. As a result, with all its other expenses, Delta is currently burning through US$60 million a day, and Jet Blue $10 million. Delta just announced a Q1 net loss of $534 million.

As of last week, the inactive fleet of aircraft was approximately 14,400, over two-thirds of the 22,000 mainline passenger airliners, leaving 7,635 in operation. In Europe, less than 15% are operating, while in North America, 45%, and or Asia 49% are working respectively. Narrowbody aircraft are less affected, 37% are operating vs. widebody aircraft 27%. In the U.S., domestic flights are averaging just ten passengers while international flights average 24, according to a trade group.

These costs have already had an impact.

Centre for Asia-Pacific Aviation, a Sydney based global airline consulting and analytics firm, concluded without government financial aid, half of the world’s approximately 800 airlines would be bankrupt by the end of May. Based on its analysis of cash flows. CAPA estimates that in less than 75 days, half the globe’s airlines will be technical insolvency.  Airlines, because of their financial structure, are heavily dependent on cash flow. Their primary assets, aircraft, are 20-plus year assets, financed via 20- to 25-year term loans or 12- to 15-year leases. As a result, airlines must receive enough cash to meet their monthly loan or lease payments. To cut costs, airlines are cutting fleets and other expenses.

American Airlines is accelerating the retirement of its oldest planes, Boeing Co. 767s and 757s, and it’s fleet of 20 Embraer SA E190s and some 50-seat regional jets. It’s also considering to retire its oldest Boeing 737s. Delta is studying the early retirement of its oldest Boeing MD80 and MD90 aircraft, while United expects its oldest Boeing 757s and some 767s to be grounded permanently. As a result, U.S. airlines could shed 800 to 1,000 aircraft, which could result in a reduction of 95,000 to 105,000 airline jobs. In the U.S. under the terms of the $50 billion government bailout, airlines are barred from cutting jobs through September 30; however, airlines are warning staff that cuts are coming. Southwest has said that it will be a much smaller airline going forward and for the foreseeable future.

If the airlines get through the next 75 to 90 days, what then? Well, the initial news from China is not favorable. According to Bloomberg, around 35,000 domestic flights are operating in China daily, compared with 80,000 before the COVID-19 crisis, according to the International Air Transport Association. The figure has been stalled at that level since services resumed in early March. While there was an increase in business confidence and journeys to visit friends and family, there’s been no resurgence in the vital tourism market, according to Brian Peace, IATA’s chief economist.

In the U.S., the future is even bleaker, with a return to travel inhibited by health concerns and the increasing economic impact. An IATA-commissioned survey said that 40% of respondents would wait six months or more to fly again following the containment of the pandemic. From a purely anecdotal perspective, this agrees with the majority of my clients, who are cutting travel budgets and don’t expect them to increase after infections fall. Thus, the high paying road warriors will be MIA for a while as companies have learned to function via Zoom, which is much cheaper than a business class seat. Even when business travel returns, long-haul international flights will take longer to revive. The airlines foresee an uptick in bargain-hunting leisure travelers this summer; however, historically, those seats have been subsidized by the road warriors. Delta’s Chief Executive, Ed Bastian, expects the recovery to take two to three years and that Delta will be a smaller airline for some time.

Since most of the European carriers, i.e., British Airways, rely on long haul high paying passengers to subsidize short-haul flights, their business models will have to change. In the U.S., the major carriers have also built on the ability to connect U.S. second tiers cities with other second-tier cities in the U.S. and worldwide as their business model, with falling business travel and especially international travel, their models will also need a reevaluation.

Overall expect the number of flights to fall and smaller planes on many routes, with overall increased fares. For many people flying will once more become the luxury it was before deregulation. Many flights to secondary markets may disappear altogether. The only upside is that for the moment, the dreaded center seat is no more! While Europe will not be as severely affected due to its rail network, in the U.S., the effects could be devastating for smaller communities that lose all airline service. Loss of airline services to these markets will have many knock-on effects, which will further limit their ability to recover from COVID. How much damage will Congress and the U.S. be willing to accept?

With government aid, comes the question, will we revert to the nationalization of airlines again? Since the 1970s, many airlines were privatized, new airlines entering the market, many went bankrupt, and there was much consolidation. Overall, airlines have been terrible investments, and most have lost money. In the U.S., bankrupt airline corpses litter the aviation sector. However, many countries, including the U.S., have claimed that domestic airlines are essential to national security, so what to do? If there are just bailouts, there will be a public revolt at an industry whose shareholders and management kept the gains and socialized the losses. Many expected a pandemic of some sort, and according to public health officials, COVID is unlikely to be the last. Thus, can airlines survive in a world of shutting down? Airlines suffered from SARS and the eruption of Eyjafjallajökull in Iceland. To have another hit soon after this, it may finish them off for good. If governments take equity as part of the bailout, is this the first step in nationalization?

I think the questions to be asked are:

An interesting discussion to be sure, and if we cannot make a private, public model work, nationalization will undoubtedly return. Airlines may return their model in the 70s and before.